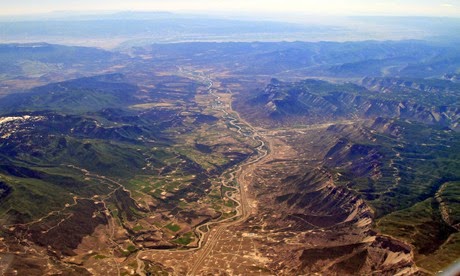 An aerial photograph shows a large field of fracking sites in a north-western Colorado valley. It can take millions of gallons of fresh water to frack a single well. Photograph: Susan Heller/Getty images
Fracking is depleting water supplies in America's driest areas, report shows | Environment | theguardian.com: "America's oil and gas rush is depleting water supplies in the driest and most drought-prone areas of the country, from Texas to California, new research has found.

Of the nearly 40,000 oil and gas wells drilled since 2011, three-quarters were located in areas where water is scarce, and 55% were in areas experiencing drought, the report by the Ceres investor network found.