The war on cars -- cars are still winning, people are dying

Investing in Place and LACBC: "People walking and biking represent 19 percent of all trips in Los Angeles County, yet make up 39 percent of those killed in traffic collisions. In low-income communities of color, people walk and bike at higher rates and are at even greater risk of being hit and killed due to lack of investment in safe streets."

The Corsair: "This is a meeting of the Community College Association for Student Advocacy (CCASA), a brand new voice in the LA County student government scene only recently incorporated on February 1. Their “master plan?” To make public transportation on LA Metro buses free for college students across the county.
“We’ve been [petitioning] for about four days, and we have somewhere around 300 to 350 signatures,” said Filipp Krasovsky, founding member of CCASA and Santa Monica College student, to the gathered crowd at the second ever meeting for the group. Krasovsky was updating two dozen CCASA members about the beginning of their efforts to support Move LA, the public transit political organization currently preparing bills for local and state legislatures to make fares for students using the LA Metro system either free or subsidized to the point of negligible cost."
at 11:27 PM No comments:

Activists take another hill in the #war_on_cars 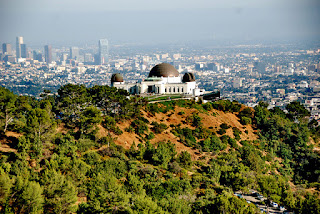 Shuttle Service Will Expand Throughout Griffith Park: LAist: "Per the plan, the city will vastly expand shuttle service within the park, will begin charging for parking close to the observatory, and will (crucially!) keep Mt. Hollywood Drive free from both cars and shuttles."

(Photo by Michael Locke via the LAist Featured Photos pool on Flickr)
at 11:21 PM No comments:

Ban Cars: "If you don’t think that one car will make a difference, consider this. Right now, about three percent of all trips globally are taken by bike. A big study by UC Davis and the Institute for Transportation and Development Policy says that reducing car use enough to double that figure to six percent by 2050 could make a game-changing impact. Cities would save $24 trillion and the planet would reduce CO2 emissions by nearly 11 percent. That’s enough to prevent the increase in transportation-related emissions that the UN predicts. And the world would be happier and healthier for it."
at 5:41 AM No comments: